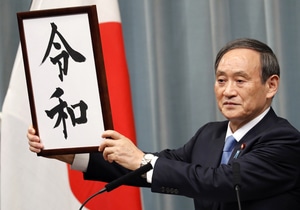 Japan’s Chief Cabinet Secretary Yoshihide Suga unveils the name of new era “Reiwa” at the prime minister’s office in Tokyo, Monday, April 1, 2019. Japan says next emperor Naruhito’s era name is Reiwa, effective May 1 when he takes the throne from his father.(AP Photo/Eugene Hoshiko)

Abe explains choice of Reiwa for next era name

The name of the era of Japan’s soon-to-be-emperor Naruhito will be Reiwa, the government announced Monday.

Emperor Akihito is stepping down on April 30, in the first abdication in 200 years, bringing his era of Heisei to an end. The new era takes effect May 1.

Abe said the name means that culture is born and grows when people come together and “care for each other beautifully.”

“With this selection of a new era name, I renew my commitment to pioneer a new era that will be filled with hope,” Abe said.

The choice was a break from more than 1,300 years of drawing era names, or gengo from using Chinese classics. It was kept strictly secret ahead of Monday’s announcement.

“We hope (the era name) will be widely accepted by the people and deeply rooted as part of their daily lives,” Suga told reporters in first announcing the name, written in two Chinese characters in black ink calligraphy on a white background.