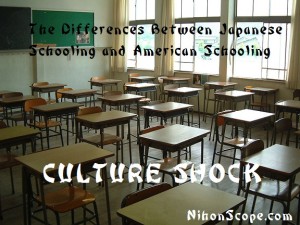 What Differences to Expect When Going to School in Japan

There are a few things to understand about Japanese Schools and how they relate to American standard schools, and it comes down to the way you are taught, what the teacher expects from you and how you are graded.

In American schools, there is a lot of freedom to expression opinions and to ask questions. In fact, it’s said to be that those who take advantage of this idea are the ones who get the most of out classes in America and get the best grades. Whereas those who go to school in Japan will notice that it’s not as appropriate to ask questions in class, it’s more appropriate to ask questions after class or to ask your friends and classmates instead. It’s more of a virtue to be quiet during class, and by being ‘quiet’ you are seen as a good student in Japan, and with that, your grades can and many times will improve simply based off of that fact alone.

There is no eating or drinking in the class room or sitting on desks in Japan classrooms, whereas in America this custom is beginning to be the normality of going to school. When it comes to studying in Japan be it from 1st grade to University, the teacher will simply write down notes on the blackboard, and you will be responsible for taking down those notes and remembering them. Whereas in America the teachers do not use the blackboard as often and ask questions of the students while teaching. In Japan, it’s not very often you will see a teacher asking questions to their classroom.

When it comes to examinations, American classes rooms will expect you to be able to write down facts, names and history, but not only that but to form your opinion based around it as well. In Japan the notes you took while in class are simply the answers for many examinations, and you simply must just remember the facts. Although these two systems seem very opposite, the formulation of the illegal standards of Common Core in America is quickly leaving American school children behind. At this point although the Japanese system is a bit odd to us westerns, Japan is ranked #2 in schools in education in the world (from 2014) just under South Korea, whereas America was ranked #14.

So either way you want to look at it, Japanese students and the way they teach seem to be working much better then the American standards. No matter what the cultural shock may be, this remains to be a fact. But I often wonder with so much freedom overall given to American students if it creates a different kind of education, more of an opinionated one that could very well be the American spirit of freedom to do what one wishes. If one wishes to become more educated the platforms of doing so are there, as I’m sure it is in Japan if one wishes as well.

If you are interested in going to school in Japan contact us on Facebook and can will help you find a school in the area you’d like to study in. I’d also suggest checking out my free Japanese learning resources here that will help you become more proficient in speaking, reading, writing and understanding Japanese.

So now you know the differences between Japanese Schools and American Schools!