Mommy, Where do Pachinko Machines Come From? 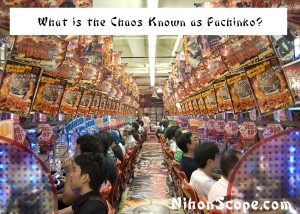 Pachinko’s humble beginnings started in the most unlikely time in history, the 15th century, in England specifically. These first remnants of what would eventually be called pachinko started when an attempt to bring outdoor based games that were popular, indoors, such as a croquet. These first attempts at these games featured wickets, which soon were exchanged out for pins that could be knocked down. By the 17th century these games changed to include pockets. This eventually became known as billiards.

But how does billiards make way for what is now known as pachinko? In fact before we continue, what the hell is pachinko anyway? Pachinko (パチンコ) is basically like a pinball machine (in fact it means a Japanese form of Pinball), it’s said to be a form of recreational brainwashing in places like arcades. You could say it’s very much just a gambling pinball machine. Pachinko is as popular in Japan as slot machines are in Western casinos. But it’s better to say that a pachinko machine is more so a cousin to the infamous pinball machine. It’s vertical like a pinball machine, but it does not have any flippers to knock the balls back into the gaming arena, instead a pachinko machine will use large amounts of small balls instead.

The person playing will fire the balls off into the machine and basically watch them as they cascade throughout the machine navigating metal pins on the way down. I’m actually sure you’ve seen children toys that are small versions of pachinko. You know that crappy plastic toy with 3 small metal balls and a tiny plastic launcher that sends the balls into the arena? In fact there is some antique handheld bagatelle pachinko games that are still being passed around the industry as fascinations, but, they are basically where these little crappy kid games came from! (And I know you know what I’m talking about!) 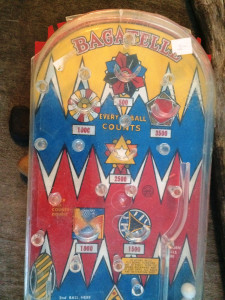 But what’s the point of pachinko, and what exactly gets the Japanese off by playing this mundane game? Well as the rules have it as the balls navigate throughout the arena they could find pockets that could catch the ball, which then will many times release additional small metal balls. You can very well say that these balls are basically like tickets you’d get from a ski-ball machine. You can then take these metal balls and exchange them for a pikachu pencil or hello kitty eraser. Of course these pachinko machines quickly have become more electronically stimulating, which keeps people brainwash… I mean entertained for hours and hours at a time.

These pachinko parlors in Japan are called Pachislo or Pachislots and these areas truly look like an overactive casino in Las Vegas, but instead of getting cash for playing you will instead exchange your balls for tokens or tickets instead. Since gambling for cash is illegal in Japan you have to jump through a few hoops to finally get paid for your big pachinko win by heading to a separate establishment from the parlor to receive your money for your tokens or tickets. But just because it’s illegal doesn’t mean the parlors are not raking it in big time, in this BBC Travel article, Pachinko parlors are said to make 30 TRILLION yen per year (which is about 250 billion USD).

But lets get back to where this crazy game even came from, but lets jump a bit forward in time. We know that the humble beginnings of this game also assisted some other well known gaming tables such as billiards. But it wasn’t until the 1920’s when a children’s toy called the Korinto Gemu (Corinth Game) was built. This game was based around an American named Corinthian Bagatelle. It first arrived as an adult entertainment pastime in Nagoya, Japan in the 1930’s and of course spread from there. In the 1980’s pachinko machines were simple mechanical gaming machine which used bells to indicate what was happening inside the machine. But I guess the best way to show how pachinko evolved over time would be to show a progression of pachinko machines over the years.

So there you have it, a tid bit of this popular arcade game being played constantly in Japan. Remember, as long as you have a loop-hole and bright and loud flashing pachinko parlor you can certainly make a good amount of money playing with steel balls whilst in Japan, or better yet, funding their pachinko empire and the Japanese economy. Use to have a free version of the game here, but most of the free have turned into real gambling sites and I won’t be sharing any links to those because they’re just shark sites. You can try checking out old sega roms or flash games, but stir clear of the UK gambling sites if you want to try pachinko.