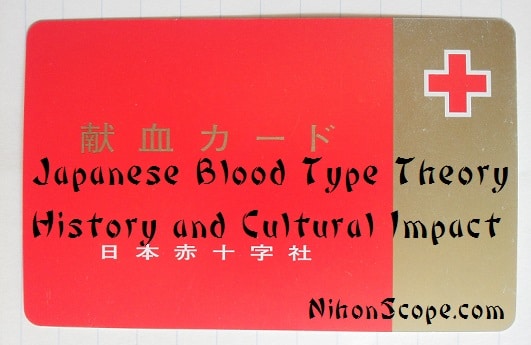 What exactly got the Japanese to be so darn interested in their blood type? I’d say it’s not too far off of why people believe zodiac signs and astrology. Could blood type really determine personality traits?

In Japan there is a theory or belief if you will called ketsueki-gata, it’s the belief that a persons blood type can predict personality, temperament and compatibility with those they surround themselves with. You can say ABO blood type or ketsueki-gata is very similar to astrological signs.

This idea came about from scientific racism which was developed in Europe during the early 1900s, in which Japan used blood type to countermeasure against it. This belief started with the publications of a man name Masahiko Nomi in the early 70’s. Overall though the scientific community in Japan overall discredits and dismisses these beliefs as simply pseudoscience, mostly because of the lack of evidence that personality traits exist based on blood type.

Although, some independent studies are suggesting there is a significant relationship to personality and blood type, it all really depends on which side of the scientific circle you want to listen to. But lets take this almost to a semi Aryian level, as this blood type idea was being used for more so ‘dark’ ideas.

It was 1927 and a professor Takeji Furukawa just finished publishing a paper called ‘The Study of Temperament Through Blood Type‘ in the Psychological Research journal. The ideas within this paper quickly became popular inside Japan, although Furukawa lacked credentials off this basis. But the military at the time was commissioned to study ways to breed the most perfect soldiers. (Adolf Hilter anyone?).

In another study which Furukawa compared was the distribution of blood types between two groups of ethnic peoples. The first was the Formosans of Taiwan and their local Ainu people of Hokkaido. These studies of course stemmed from political interests. After Japan’s occupation of Taiwan which then lead to the invasion of China in 1895, these people vehemently opposed the Japanese as they occupied their lands.

Furukawa’s research was set to expose the inner racial traits of the Taiwanese who opposed the Japanese in such beastly and crude manners. After Furukawa finished his research of the Taiwanese he found that over %40 of them had type O blood and this is where more of the blood type theory continued. He concluded that the rebelliousness came from a genetic disposition stemming from their blood type. This ‘conclusion’ was finalized once they studied the Ainu people and found that only %20 of them had type O blood and overall they were considered to be passive. As we continue down this path the easier it is to see how Japan got along with Nazi Germany so well. 😛

It was soon decided by Furukawa that the Japanese should in essence interbreed with the Taiwanese to reduce the number of people with the type O blood. But no matter what really was behind this idea, there are studies showing certain real differences between stress levels of type O blood and others, so perhaps the Japanese were able to see this, but perhaps acted in very odd ways to perpetuate racial ‘cleansing’. To date Masahiko Nomi’s books are still popular and his son Toshitaka Nomi is still continuing his research by running an Institute called Blood Type Humanics, he also established the Human Science ABO center in 2004.

My personal conclusion to this? I honestly believe there is truth in ketsueki-gata, perhaps not what these early pioneers set off to prove, but there are somethings to consider when looking into this ‘fad’. But what happens in society when a person gets rejected from society because of these ‘predictions’? Overall from the research I’ve compiled and the stories I’ve read, many Japanese are haunted by the fact that they have a certain blood type, and many times will lie to avoid being turned down for a job or University… or at times a romantic involvement.

For more information check out this katsueki-gata infograph, as there is some additional theories and some more history behind this interesting cultural ideology in Japan.