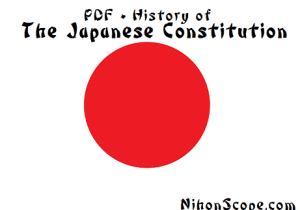 (You Can Read the Japanese Constitution in PDF form HERE)

When it comes to learning about the Japanese constitution and history one has to truly learn where the Japanese had come from. Through 1889 to 1947 Japan was working under the Meiji Constitution. This document was largely created and implemented because of a man name Ito Hirobumi where he called for a bicameral parliament which in Japan is called the Diet (A bicameral legislature is one in which legislators are divided into two separate assemblies, chambers or houses). In the Meiji constitution the emperor had full control over the Japanese army and navy. During this constitution voting rights vastly increased over 25 years when it was first written in 1889 which guaranteed universal male suffrage in Japan.

As WWII begun the Japanese military was able to assume control without going against the current Meiji constitution, but soon after the defeat by the American allies Japan was soon again looking to change or more so forced to change their current constitution to meet more of what the allies felt was a civilized constitution and government. On May 3, 1947 the new constitution of Japan went into effect. With this new constitution universal suffrage of all those at legal age were able to vote, which immediately gave women of Japan the right to vote for the very first time in their governmental history. The new constitutional document was implemented largely because of Commander Douglas MacArthur with his chosen occupational staff he had brought with him to help prepare the new Japanese constitutional draft in Feb 1946 after the first Japanese attempt to write their new constitution was deemed unacceptable.

Their attempt to draft this new constitution was rejected on the stance that the current Japanese government in charge of writing the draft were being way too conservative. Soon after the rejection MacArthur gave the order to his younger staff to draft their own version in only one week. The new documentation and constitution of Japan was quickly submitted on Feb 13 of 1946. This new constitution protected civil liberties as well as preserving the emperor as a symbol of the state and unity of the people, but in the end he was stripped of his power of being a quasi-divine figure and being able to control the state of Japan with the will and flick of a finger. At the same time the Japanese constitution forbade ever again waging war EVER. 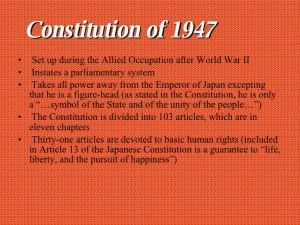 By May 3rd in 1947 it was promulgated by the Diet and it came into full force. So as you can clearly see that Japans constitution was heavily influenced by the current constitution that Americans so fully enjoy. But from further research the Japanese felt like they were being shoved into a box and forced to give up their honor and their international power. Be that as it may, but when you go through the Japanese constitution and see how much more freedom that was passed to the people of Japan after the defeat by the Americans in WWII you’d be hard press to ask any woman in Japan to give up their rights to be a fully present individual in their culture with all the liberties and rights as any man that also lives and breathes in Japan. 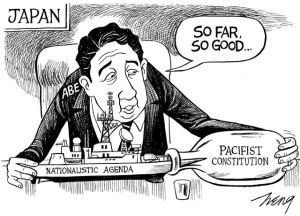 I’d personally have to say besides the bloodshed that was spilled during WWII between Japan and the American Allies that a lot of good came about because of the newly drafted constitution, and be it you’re in favor of Article 9 which states that Japan shall not wage war or maintain an army of any sorts or not, you should view this from a purely economic standpoint. By not being allowed to pursue the wars of the world which are constructed by corporate interests and bankers, Japan has clearly dodged a bullet of further economic degradation which has certainly played a part in them becoming an economic powerhouse in the past and still in the present.

I’d say giving the Japanese constitution a quick read would certainly give you an idea that it was truly written to pass along as much freedom as possible to regular citizens of Japan while limiting and auditing the current governmental agents that have been elected to keep them from corruption. But as we all know that’s never %100 going to be stamped out, but the way it’s positioned by limiting government control by the emperor certainly offers to the people of Japan something more then they had before WWII.

I’d certainly say this constitution is very well written in favor of the people in general. Although I dislike seeing attempts to remove or reinterpret Article 9.

You can read the Japanese Constitution here.