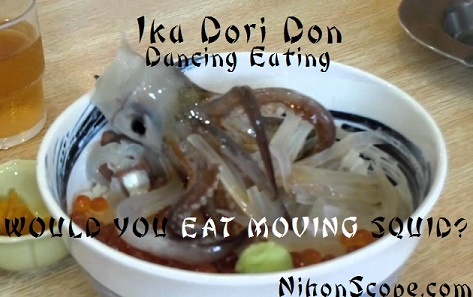 Discover What Eating Live* Squid is Like in Japan

Nothing like some scary Japanese food to really get your day going! But, maybe it’s really oishii?

Ika O Dori Don is apart of what is called Odorigui. Odorigui literally means ‘dancing eating’, it’s a type of seafood in Japan. For example Ika Dori don is a live squid with it’s top half removed (it’s head) and it’s served on top of a bowl of rice and sushi. The reasons these seafoods can still dance around after having their heads cut off comes from the large amounts of salt in the soy sauce, which reacts with the still active nerves inside the squids body.

Odorigui refers to eating of live seafood while it’s still moving about, or it could also refer to eating moving parts of the seafood. Seafood which is eaten in odorigui style include:

Ice gobies, Squids and many other similar seafood’s. Odorigui only is referenced by seafood that can be seen moving still while eating it, this means eating live foods like sea urchins does not count and is not odorigui style cuisine.

But why would this Japanese food custom come about?

This method or now new cuisine in Japan was created by a sushi restaurant called Ikkatei Tabiji in Hakodate, Hokkaido, and it was done mainly as a marketing gimmick at first, but quickly spread like wild fire as other restuarants followed suit, but you’ll need to ask for Ika Dori Don by the name given to it by other restuarants as the name is now patented!