A Brief History of Chopsticks + Documentary 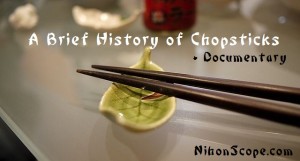 There’s More to Chopsticks Than Meets the Eye

A Short History of Chopsticks in Asia

hashi — No, not the Bridge the Chopsticks

Many many moons ago around 1200 BC the Chinese were using what today we would call chopsticks. Around 500 AD these tools of the feed my face trade flew into areas like Vietnam and Japan.

(You can watch this video here)

The first chopsticks that have been noted and found were in the ruins of Yin, in the Henan province in China. There were examples of Chinese ascribed scrolls, paintings and pottery that shown the first known chopsticks being used, which were a bronze chopstick set found in tombs.

These chopsticks were available and used for stirring and moving food that was cooking. So at this time chopsticks were more so a cooking utensil. Chopsticks came about because a population increase all across China which sucked up all the resources in city areas and it forced cooks in these aread to start creating ways to develop cost-saving techniques.

Food was being chopped into more fine pieces which required much less cooking (fuel and resources) then before. But whats more perfect then some chopsticks to be able to grab these tiny pieces of food then a chopstick? So as this continued things like knives became obsolete. The chopstick era truly began because of Confucius. Being that Confucius was a vegetarian he saw knives and stabbing utensils as something that would be used in a slaughterhouse.

Confucius also had a mighty strong belief in Feng Shui and he thought that knives evoked warfare, killing and violence which over all destroyed the pleasant feeling and vibe of eating during meals. Afterward this idea sprung into action across Asia. Of course many Asian countries use chopsticks a bit different then some. For example, Chinese chopsticks have more of a blunt end to them, in Japan chopsticks had certain sizes for both genders (7 inches for woman and 8 inches for men).

Around 1878 the Japanese were the first country to make disposable sets of chopsticks made from bamboo and wood. Of course more economically sound families would eat their meals with chopsticks made out of brass, coral, jade, ivory and agate. Most well off families would and still use silver based chopsticks, which are said to turn black when they touch poisonous food.

There you have it, a brief history of the mighty chopstick!
Ha-shi or はし is chopstick in Japanese, which can also mean bridge!
So, はしおください。（ha－shi o kuda－sai）。 Chopsticks Give Me Please!

Be sure to check out Japanese Chopstick Etiquette Here.