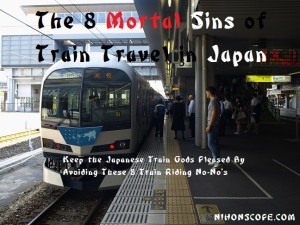 Please the Japanese Train Etiquette Gods by Knowing the 8 Mortal Sins of Train Travel in Japan!

There are some simple things that one should know when moving, traveling or teleporting to Japan. When you ride the train, you should be aware of some simple etiquette. If you fail to do so, you’ll not only get weird, odd and sometimes mean looking faces staring at you, but soon after getting off the train, a ninja may or may not lobe off your head… of course it all depends on what you failed to understand when it comes to etiquette on Japanese trains.

So here are the do’s and don’ts when it comes to riding the Japanese train ways!

Here’s a quickie for those that may not believe in the Japanese Train Gods. This is similar to those who don’t believe in god (Christian), yet still show up to church on Christmas Eve. So take it kind of like that for those.. Not so sure about these legendary beings!

Waiting in Line at the Trains and Letting Passengers Off

Make sure you stand in the right line when getting on the train. There will be markers and writing on the ground to let you know where to stand. When the train finally arrives, it’s best to stand off to the side while the passengers depart. Just make sure you get it right…. those train gods can be hard on foreigners, but it’s only so they get it right! Just like a strict parent.

First of all, it should be rather known, NOT to grab a bunch of butts while in a crammed train car. So I shouldn’t need to go into that, but if you are unaware, this is a major problem in Japan. It’s called Chikan, it’s where a man (mostly) will grab butts and whatever else he can while everyone is smashed in like sardines.

They do this because overall, they know they can get away with it and no one will know, except the chikan’ed (new word?). But because of this there are a growing number of all women train cars emerging. Just make sure you are a woman if you got on one, otherwise, you may get beat up.

But to finalize this section off, let me share some real train etiquette, because, honestly you should know not to be grabbing people on their who’who’s and ha’ha’s on the train.

Do not put makeup on or get dress or ready for work or school on the train, it’s considered a bad omen, and someone may just have to smack you up side your head for doing it. So keep that in mind, do all your getting ready before getting on the train.

Don’t smoke on the Train..

Now days, smoking in public places is not illegal in many parts of Japan. You will end up with an annoyance called a fine if you get ratted out, and trust me, you will. It’s so well known that you do not smoke on the train that they don’t have any signs or recordings tell you not to do it!

There are many times smoking rooms in the stations where you are allowed to smoke. I guess the best bet is… if you don’t see a go ahead and smoke sign. Don’t do it. There will be available smoking rooms and areas not only in stations, but at festivals and in public areas.

Do not eat or drink on the train

There is no eating or drinking in the cars. Wait until you leave the train to continue on munching… as stated above there are certain trains you can eat on, but for overall purpose trains, it’s not recommended… that is all 😛

When Waiting for the Train – Wait BEHIND the Yellow Line.

The yellow line is also called the ‘suicide line’. It’s basically a no go when waiting for the train, do not step over it. It’s also got bumps on it so the blind know it’s there as well. This is also on Japanese sidewalks as well.

No talkie on cell phony!

This is most likely one of the most known rules by foreigners when they hear train etiquette, but that doesn’t mean they still listen to it. It’s best to finish up your call before the train arrives, and if you get on the train while still on the phone, you have a couple more seconds to wrap it up before you literally waken the Japanese train gods and horribly upset them.

But, there are loop holes to the Japanese train gods etiquette rules on the train. You can answer a phone call long enough to let the person know that you are on the train and that you can call them back once you arrive at your station you are getting off on.

Trains overall are quiet. So any noise that erupts from a phone will be noticeable.

Give up your seat for Pregnant, Handicapped, Injured, Older  Individuals and People with Young Children

This is pretty simple and it comes down to giving up your seat to individuals who more so need your seat then you do. There are priority seating areas on the trains, but many times these people will not use these seats. It’s because of the politeness factor and the ‘I don’t want to be a bother’ syndrome in Japan that this happens.

But either way, there will come a time when these select few of heroes come on to the train and will need your seat. Many times you will know they want your seat by staring at you. If you ask them if they want the seat, they will pull the ‘I don’t want to be a bother card’, but don’t pay any attention to their ‘no it’s okay’s’ just give them your seat. This will make the Japanese train etiquette gods very happy and you will not be slain when you leave the train.

Instead, you’ll be allowed to live another day and you get 1 free get out of jail card which can be used when you accidentally break one of these train etiquette rules! Pretty useful for not being struck down later in your train riding career.

Being Gross and Riding the Train = 3 Public Lashings

But when it comes down to it, be aware of your stinkiness. Best bet would be to carry some kind of deodorant with you while you travel about Japan especially on the trains! But overall, be sure to avoid heavy metals in your deodorants as that causes cancer. So be selective with your stink be gones, avoid cancer and please the Japanese train etiquette gods all at once.

So that’s it, you now know these very important religious rules from riding the trains in Japan. You may also want to understand the all important Chopstick Etiquette guidelines in Japan… least you be punished by the Chopstick gods.

Some of this information was gathered from this blog here.