This is the Onojo location of Sharely Style Verde, but the same management runs both locations.

This page has been made to write a review of my wife and I’s experience about living at Sharely Style Verde shared housing in Fukuoka. Right now they will be receiving a 1 star (See update below) because they currently are deciding to steal our deposit because they made a mistake thinking we wanted to move out later then we did, despite us telling them in writing that we wanted to move out on the 4th.

Can Sharely Style Verde Be Trusted?

If they still decide to keep the money and steal from us I will be writing a fair review either way, but it will be noted that they will not be honorable when it comes down to money and how they treat that side of the business. I would also recommend never speaking with the staff about anything related to the money side of the business because they’re easily confused.

We managed to get about $400 back of our deposit (a month or so after the first review), still upset that we had to even negotiate that honestly when we never said anything about STAYING. A lot of these places have trouble understand English so keep things to yourself, if you’re going to move out, MOVE OUT and don’t say ANYTHING otherwise until you KNOW you need to tell them you need to stay.

Overall, I can’t say that I dislike Verde completely, I actually have very fond memories of living their and would consider it again, so $100 out. Whatever I’m over it for the most part. Just take the lesson we learned to heart before moving to Japan, you can stick your foot in your mouth because they have trouble with English. I would actually and have recommended Verde a bit since this post, so even though they pissed us off something fierce in the moment overall it’s a good place, Sharely Style Hakata was pretty gross a lot of the time and the upper kitchen stunk pretty bad. But overall if you stay in the lower kitchen I think from what I saw was a decent place to stay while going to school or working for awhile.

Star wise I’d give them a 4 stars overall besides adding in the confusion part, if I was to add that back in I’m thinking more 2.5 but the staff is always changing so there is never the same person really handling that part and it’s easy to say not all of them would have done that.

Are Japanese Futons Worth It?

Before I came to Japan, I was going through the options of where I was going to live at. In the end I ended up going with a place called Sharely Style Verde. Although it’s a decent place to first come to when arriving in Japan, it certainly has sort of a high price tag to live here. Then they tack on fees to use their beds and to park your bike etc. They rent their beds out for around $30 a month, so I decided that it would be best that I purchased a futon instead of renting a bed. But the big thing about this was that I lived in Colorado, USA at that time. So it was tough to decide how I was going to go about buying one, full well knowing I wouldn’t be able to touch or feel the futon before purchasing it. It felt like it was almost like gambling.

But the big thing that I was worried about was it being big enough yet not breaking the bank and then being able to have it shipped to SSV in time before we got to Japan. Otherwise, my wife and I would have to sleep on the floor, and after a super long flight that is one thing, I was not interested in doing. I was searching all over the place from Amazon, to Wayfair and trying to figure out the best futon to purchase. The thing about all this was that even if the futon was somewhat affordable and big enough the shipping blew it out of the water. Then I stumbled upon a company called “Futon Beds from Japan, ” and they had authentic Japanese futons for sale. The great thing about running into them was that they’re FROM Japan and they were only a prefecture away from Fukuoka, so it was super simple to ship, and it arrived before we got here.

It was a super awesome find, and it was quite affordable. Being that I’ll be here in Japan for over 2 years and in the end moving to another place after my stay at SSV I figured I’ll save the $30/m and get a bed that I can take with me. The other cool part about running into this company is that they also sell kakebuton quilts. Being able to purchase a quilt set certainly was convenient. Here is a picture of the futon set we ended up going with, I’d take a picture of ours (and have, which can be seen on our FB page but it’s covered with sheets, and we have a mesh covering for the kakebuton, so it’s a bit hard to see it. 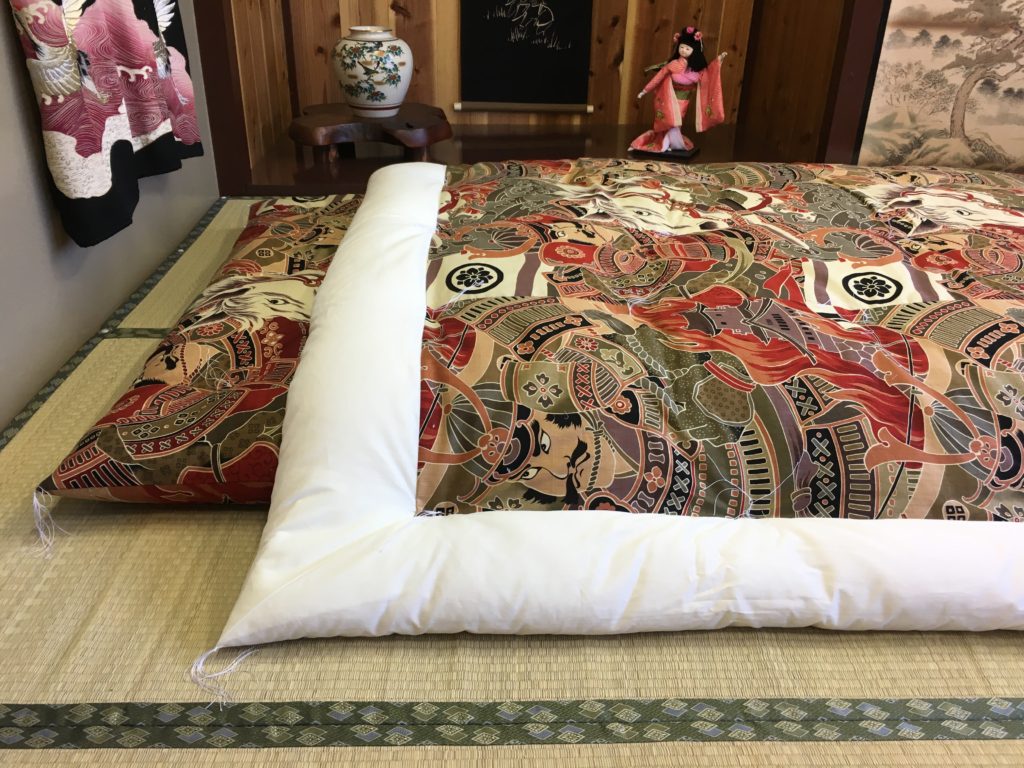 Picture from FutonBedsFromJapan.com – but it’s the design we purchased

I highly recommend checking them out if you’re looking to buy a Japanese futon and if you need help ask for Dean he can help you figure out what you need, just like he did for my wife and me.

So far as a review of the bed:

I got a queen sized and for the most part as long as I stretch the bed back out before going to sleep it is more than long enough for me (I’m 6 foot 2 inches) and big enough for a couple. The thickness is way better than I was expecting honestly, although at times I do notice the floor after a while of lying on my side and my hip digging in the bed. Other than that, no complaints at all, and Dean also stated to me that many people use a cushion set under the bed. My wife and I have not felt it necessary to do that, and our room is a fake hardwood with concrete underneath, so it works pretty well. 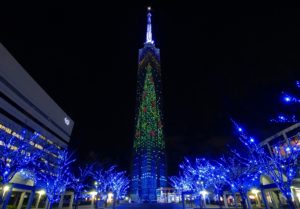