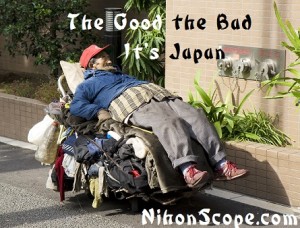 Want to Live in Japan?

Throughout my 15 years of studying Japanese culture I’ve noticed one thing when it’s comes to researching about Japan, and it’s that very few places ever tell it like it is, there’s always a grass is greener attitude with many Japanese hopefuls (people wanting to go to Japan for work or school).

The reason I believe is because many people when they want to elope to another country want to see it as ‘greener on the other side’ and of course that comes with a side effect of what I call bullshit blinders. But the fact of the grass is greener is not always the truth. But it goes farther then just creating a fantasy island in your head and ignoring the troll under the bridge.

It starts from your own personal experiences and attitude of where you are at right now beyond what the true ‘bad’ or ‘ugly’ that may be cascading through out the given society at any given time.

…What do I mean by that?

It means that the ‘grass is greener on the other side’ does not work because of YOU, not because of the place you are currently at vs where you want to go. It all stems down to your attitude about where you are now. There is an old story about a monk who was sitting at a cross road between two cities. As he sat there resting, a man traveling trekked up to him and asked him “I just came from the city in the west! Do you know how the people in the east are like?” and the monk looked at him for a lengthy period of time then asked “How were the people in the west?”and the traveling man said “I loved the west, the people are wonderful”, and the monk quickly stated “The people in the east are wonderful as well”. An hour went by and another man trekked up to the monk and he asked the same thing but this time he said he was from the east and the monk again replied similarly “How were the people in the east?” and this time the man blurted out “The people of east are pompous, snobby and mean” and the monk took a deep breath and replied “I’m sorry to be the one to tell you this, but the people of the west are also pompous, snobby and mean”.

The point of the story if you’ve not caught it yet is to basically tell you, if you are looking for greener grass to escape from something you dislike, chances are, you’ll find it where you’re going as well. The point I believe in fantasying about moving to Japan is to be realistic and open to all varieties of experiences but to create a positive attitude where I am now and take that with me. So my goal in studying for Japan is to not only see the wonderful things about Japan, but to also see it’s strife, it’s poverty, it’s robotic society and how they operate through shame and fear. I believe many of otaku (Japanese culture nerds) believe they want to live in Japan for all the glorious reasons that one would want to live in Japan, but end up never seeing the darker sides of Japan. I’m sure for many of these individuals seeing or hearing about these darker sides could very well burst their fantasy bubble that they’ve held on to for so long and emotionally invested in, thusly creating doubt or cognitive dissonance. I’m sure this territory here is quite scary for some folks #brokenfantasy (it doesn’t have to be though – and shouldn’t).

So being the person I am, and having been mentored and taught by many different entrepreneurs and mind mentors through out my life, I have a sort of perspective that some don’t naturally have when it comes to being lost in the mind of fantasy. Don’t get me wrong, dreaming of the good that will come from a change in ones life is the bread and butter of the mind, it’s the reason anything really changes for anyone, so I’m not knocking on creating the fantasy, but at a certain point one must recognize that not everything is as it seems or better yet, it’s not always going to be peaches and cream when you get to Japan (or where ever). Knowing how to handle yourself when something happens, be it political with the law or by just social standards of how you might be treated or to even how you might be living when you arrive in Japan is all very much a positive to know before coming over. Now, you’ll never know exactly what you might be up against, but knowing some of how the culture is in a seemingly negative way, might be good to know, this will fortify you in a way before ever arriving.

I believe many people make a country change and immediately regret it because they had a land of fairies and green isles dancing in their head, but when they finally arrive to their locale of their dreams they quickly see the same load of crap that they left behind landing right back in their lap before they could even leave the Airport. So my suggestion here is, keep researching your fun and exciting interests of Japan or whatever place you may be going to, but also let a good %15 of negativity come in with it as well. I don’t want to give up my dream of living in Japan for a period of time, I don’t want a political craze or social difference to break my will to experience Japan, it doesn’t actually have to be what you or I think of as negative, it is what it is and it’s good to know but not dwell on. So living it through others experience’s can give you time to prep for some up coming battles that will undoubtedly happen while you’re in Japan, in fact when I day dream I also see the tough times that could come down the road and see how I would deal with them when they come up, which makes me confident. (this is not dwelling, I do not accompany these thoughts with the feelings of fear, except I see these challenges and use the feeling of confidence while day dreaming – #mindtrick tip)

These things are fears, but the more I can go to these fears through research and being up front to myself and the world (and feeling confident), the less these things will even take place and when they do, I’ll be prepared long before they happen. I’m much more excited then I am worried about anything that will happen, but being able to work these things out and know they could exist help me feel even more confident in moving to Japan for two years, in fact it may seem weird, but having the feeling of being the minority is something I look forward to experiencing. I know I’m much more then just a water bag implanted with encopretic emotional spew (involuntary defection) that’s purely triggered by emotional responses of my surrounding reality, so I know I could very well appreciate the awkward feelings and use them to my life experience and advantage.  Feeling what many throughout the world have to deal with their entire lives gives one an eye into a world that is fully real and offers much more compassion by understanding it at a core level, in the end gives those such as myself a better light to guide future generations forward (children and society).

In the end, I do feel that there is more positives in experiencing and moving to Japan then any of the negatives and perhaps you will feel the same after you view the video I listed here on this page. I’ll be sure to mark all my ‘negative Japan’ posts with #brokenfantasy and through my meta tags. But even now after watching information about the working poor, politics and fear and shame tactics I’m still just as excited if not more, because the #brokenfantasy is allowing me to see exactly what I’m getting myself into and I honestly don’t think it’s that bad at all considering all the pros an cons at this moment in time.

I guess the ball is in your court, what do you think about learning about the negativity of the culture you want to move into? Is it positive… or more negative in your eyes and why?