What Do Hikikomori’s Have to do With Birth Decline in Japan? 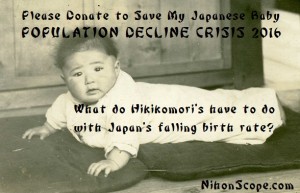 So what is all this talk about Japan and their population declining? Some say that they have enough people crammed over there already so whats the big deal? Well lets go through this and really analyze the situation so we can both better understand the decrease in birth rate in Japan. 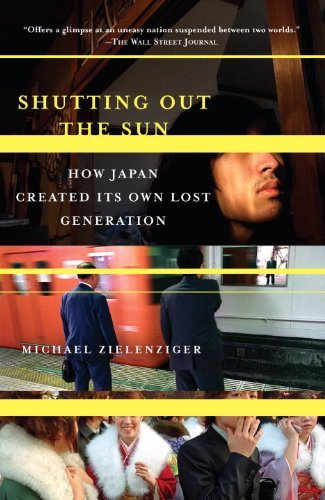 I recommend Shutting out the Sun for those wishing to learn more about the social implications of Hikikomori in Japan.

Right now the Japanese population has one of the lowest birth rates in the entire world. But at the very same time we see that they have the longest living populace. So Japan is leaning more towards the elderly. So if you are looking to learn Japanese, it’s best to start speaking the elderly language (which you can begin learning here).

But to continue on, just a few years ago Japan peaked 128 million people living in the bounds of Japan. The population is set to decline by around 1,000,000 people every single year from now on. It’s said that by the year 2060 it’s estimated that there will only around 80-85 million people living inside Japan. More then half will be 60-65 years of age.

At this pace Japan will not have enough people to take care and support all of the elderly that have retired. This will create huge problem in the long run. But maybe Japan’s robot city will come to the rescue?

But Why is the Japanese Birth Rate So Low?

In fact there are a few government out reach programs whose sole job is to help them come back into society. There is even a program where female outreach therapists known commonly as ‘rental sisters’ come to push the hikikomori out into the world again. Many times these hikikomori’s will become recluse’s because of a rejection by a woman or by general embarrassment in society.

But this can’t be the only reason why the society as a whole is dropping the birth-rate ball? Well, it’s a huge part but it’s also because many people in Japan are no longer getting married, and it comes down to a woman being tied down strictly to raising kids while their husband works 50 hours a week, hoping that karoshi (death from over work) doesn’t sneak in and steal away their husband in the dead of night.

A Japanese husband on average will help with the children and housework 1 hour a day, compare that with western men who help 3 hours a day. It’s a huge difference, and because of this many woman are not looking forward to getting with anyone and starting a family. The Japanese government is looking to push further incentives for house wives to have children and be able to work to pay for their family by offering more government assisted programs for day-care so they no longer have to choose between being able to survive, have children and a husband and not jump in front of a train.

So there you have it, over worked husbands, higher costs of living and hikikomori’s…

As you can already see I attached the first episode of “Welcome to the NHK” above. I’ll be adding this series in the Anime and Manga section soon!

Weather in Fukuoka, Japan. What to Expect?