What is Hinamatsuri in Japan? 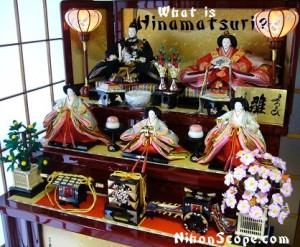 Hina Matsuri is a thousand year old festival that basically celebrates the development and happiness of younger girls. It can be called several different things: Girl’s day, Peach Festival (momo no sekku), Doll Festival, Pink Day and most likely many other things I’m sure I’m unaware of.

On March 3rd every year Japan celebrates a tradition called Hina Matsuri and/or the Doll Festival. It’s when families celebrate the development of their young girls. This is also called the peach festival. It usually starts around Feb 14th to March 3rd, during these days dolls will be decorated and it’s popular to eat a sushi called chirashi sushi which is a vinegar rice with mixed ingredients, it’s also normal to drink clam soup on the actual day of the festival.

During the period of the festival there is praying for better and good health. People will pray to the gods and offer goods and human shaped dolls which are created from paper and bamboo, these are created to symbolize their misfortunes and are then tossed into the river or oceans. Since the dolls are/were substitutes to bear misfortune, they were a luxury during the beginning of the Edo period which then transformed into the traditions that the Japanese celebrate today.

These customs come from ancient Chinese belief using these dolls. The Chinese belief is said that you can transfer misfortune to these dolls and in order to remove it from your body, you simply throw the doll into a river or ocean. For those families who can not afford real ‘luxury’ dolls that’s where the paper dolls came from, which were usually made with scraps from kimono which were then connected to by strings so as to decorate bamboo rings. These dolls can cost upwards to a million yen ($10,000), and unless they are passed down from generation to generation these handcrafted paper dolls will have to do for most. In the Edo period these dolls were decorated in accordance of certain regions. These hanging dolls were created by families who could not purchase the ridiculous priced dolls, instead they would use the scraps of cloth to make cheaper versions. These paper dolls would then be proper equivalence to throw into the river. But as time went on, everyone saw it as a waste to toss these hand crafted dolls into the river, and thus the reason the stand is now the popular way to display the dolls and celebrate Hinamatsuri.

There are TONS of definitions about the platforms of the stands for these dolls, and honestly. I’d say you can simply check this post out here if you want to learn more about that or watch the video above. Because I honestly don’t care that much about all the reasons of the platforms (I know, bad gaijin right?). What I personally care about is the basic reasoning behind this festival, and perhaps over time I’ll naturally just remember some of the customs with this festival with the platforms. So lets move on to the food during Hina Matsuri.

The food that was offered and eaten is a lot of different foods which are said to purge evil from the body when eaten and drank. Many of these foods and drink are white, green and pink/red, such as white sake and clams and Sakuramochi.

So now, you know a bit about Hinamatsuri and you can totally empress your gaijin otaku friends with your epic knowledge of Japanese festival traditions! Good for you 😛