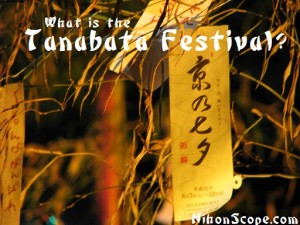 What is the Tanabata Festival?

Stars that Meet Once a Year, Looms that make God Protect Rice Fields and Men… They Want Better Handwriting!

Seems like enough to create a festival around! Why not?

Tanabata means ‘Evening of the Seventh’. It’s known in Japan as the Star Festival. It actually comes from the Chinese Festival called Qixi. The original story and celebration of Tanabata comes from the meeting of two gods Orihime & Hikioboshi (The stars (the ones in the sky) are Vega and Altair).

By custom and how the story is told, these two stars (gods) are separated by the Milky Way and they are only allowed to see each other once a year. Which so happens to fall on the 7th of the 7th month. It varies a bit from regions of Japan, but the festivities usually start on July 7th. It will be held from July to August normally in Japan.

The Tanabata ritual was originated to Japan by the Empress Kōken around 755 AD. It came about because of the “Festival to Plead for Skills”, the Chinese name is Qixi.

The festivities grew in popularity among the public and by the early Edo age, when it became commingled with various Obon or Bon rituals and traditions, and grew into what most know now days as the Tanabata festivities. Ever increasing popularity for these customs concerns the festival changed a bit from one region of Japan to the next, but overall women hoped for better sewing craftsmanships, and men hoped for better hand-writing by jotting down their hopes and dreams on strips of kami-paper. Around this time, the ritual was to use dew on taro leaf to create the pen-ink used to scribe hopes and wishes with. But as time went on, Bon is now held on 15th of the 8th month from the solar calendar, these two are very close together but over all, Tanabata and Bon festivals and events are separate from each other.

Tanabata was read as “Shichiseki” at one time. It’s believed that a Shinto cleansing ritual was invented around the same time, in which a Shinto miko wove a unique piece of cloth on a loom called a Tanabata and offered it to a god to pray for protection of rice and for good harvests. After awhile this ritual intermingled with Kikkōden to become the Tanabata festival event.