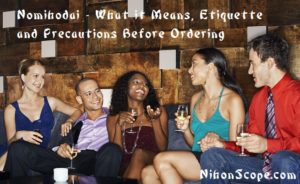 Nomihodai, what does it mean and why is it so important… mostly to foreigners? Nomihodai means “All you can drink” or in Japanese the literal translation is Nomi 飲み = “Drink” and Hodai 放題 = “all you can” or sometimes called “Free Drink System”. This is a sort of option you can have with certain izakaya to bars and restaurants. There is also all you can eat (tabehodai) that at times couples with this type of promotion. From what I know of nomihodai, is that it ranges from $5 to $20 for 1 hours to 2 hours of all you can drink face wrecking fun.

Now many times you have to be aware of what you’re getting into, you may think that $5 is super cheap, and I’d say you’re right, especially to sit there for 1 hour to 2 hours sucking down alcohol. But you’ll find when you visit Japan that many of these places that offer nomihodai will also have some clauses in their “Terms of Service” which you should ask about before agreeing to nomihodai.

For example, you may enter into a bar and request nomihodai, you may actually have to pay an entrance fee and it can vary from place to place, which could range from $3 to $10 depending on where you go. Now, that’s not where it stops, you will want to also ask the greeter or host/hostess about the plate minimum. Now… what is a plate minimum? A plate minimum is a requirement to order X amount of dishes while you are drinking  per person (usually). But usually this shouldn’t be a problem I’d hope for most people. You’re sitting there drinking, you think you would want to eat too right? So as to not entirely punish your liver, this usually is a wise idea.

Now let’s get into more nitty gritty about the infamous nomihodai!

One thing to note is if you’re planning on a night of sorrowful drinking because your ex left you, then think again, as generally nomihodai can ONLY be ordered when 2 or more people are par-taking in the fiasco of controlled liver destruction. Of course I’m sure if you REALLY wanted to slam it home, you could possibly negotiate for 1. But, the fun of nomihodai is to have that unsuspecting friend to ambush with your recent breakup. Although there are izakaya, restaurants and bars that offer nomihodai openly, there are also several places that reserve this right to people who RSVP for a larger group, just keep your eyes open.

A Few Etiquette Rules to Keep in Mind:

What REALLY To Be Cautious of With Nomihodai or General Izakaya/Restaurants in Japan?

Now here comes my main concern to all you Eggs out there looking to have your first izakaya, nomihodai or nomikai experience. There is something YOU MUST be aware of, there is an imposter that lurks in the darkness, claiming to be something of great value to the lives of Japan, but it’s sneaky, it’s not what it claims to be. What is this mysterious imposter?

What is happoshu you may ask? Well to shine a light from heaven on to the sin of what happoshu is, it’s simply pretend beer. What do I mean by that? I mean that it’s light beers 2nd removed cousin, and it’s not just light it’s LIGHT beer. It’s considered a diet beer many times and has been quoted by some to taste like ‘weasel urine’ (you’ll see what I mean). The reason this wannabe beer… or rather alcoholic drink exists is to avoid tax margins that are imposed by the government of Japan. By either brewing the beer with non traditional ingredients like corn, soy, rice and potato’s they can effectively sell their beer for much much less as well effectively ruin your liver twice as quickly. The rule is that if there is less then 67% malt used in the beer it can then apply for tax cuts, and if there is NO malt, it’s consider a 3rd Tier Beer, I believe imported beer can also fall into this tax cut category as it’s not brewed in Japan so they can avoid this tax altogether (don’t quote me on that though). 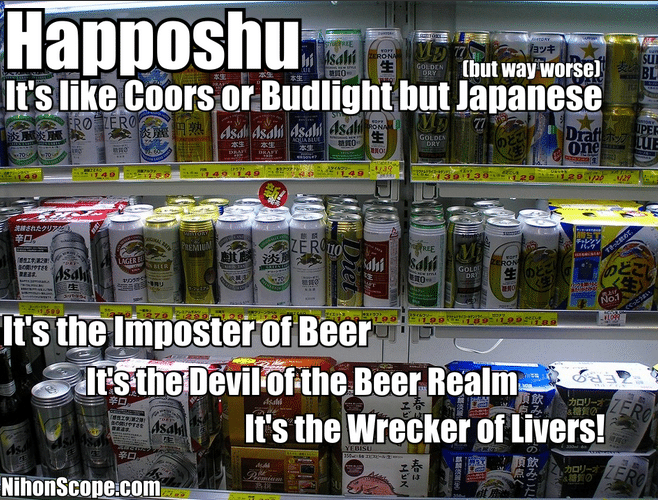 Who drinks 3rd Tier Beers? Find out in Tokyo Desu’s article about Japan’s Gretest Faux Beers. I believe you should get an idea of why you should avoid these beers altogether, but more importantly you’ll discover useful reasons why you would even want to drink these ‘beverages’.

So when you go out to a restaurant or izakaya, make sure you ask if they have draft beer (nama biiru). If they act funny afterward, you know it’s for sure a sign to respect the liver god has given you and carry forth to the next possible choice. To really shine a light on the horrible-ness of these beverages take a look at the general rating (if you have not already) of the fake beers at beer advocate, you’ll notice only 3 out of the 65 listed ‘beers’ have a rating of 4/5 (80%) then quickly it buckles down into the high 1’s. For the most part, they’re pretty bad. But to be fair those ‘top’ rated happoshu beers only had 1 or 2 reviews.

The idea of nomihodai was take from the ‘All you can eat’ buffet restaurant types that were inspired originally by the Swedish back in the 1950’s in Tokyo… So you can certainly play this stuff your face attitude with nomihodai, but I’d say in ending have fun but know for the majority of Japan, nomihodai is not a place to smash your face in with a beer bottle, Japanese people actually are well known to keep it to a threshold they can manage (for the most part), so enjoy yourself but just know you might get a ‘yappari’ or ‘baka gaijin’ throw your way if you make an ass of yourself.