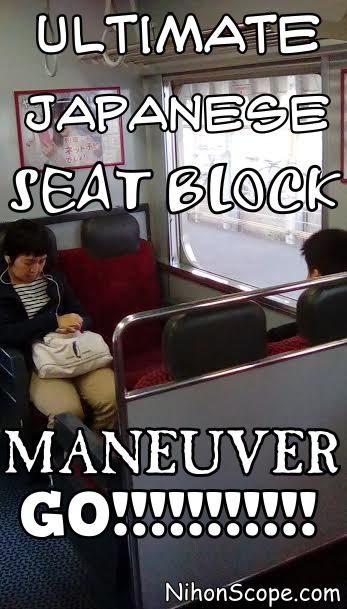 Over the last couple weeks, my wife and I have road the trains almost everyday, and for the most part most of the Japanese seem to follow the etiquette rules set by society, BUT every single day I see some Japanese breaking these rules, and at times entire train cars ignore it, people will eat, talk on phones and talk loudly, but to be fair when it’s pact in the mornings and coming home for the day it’s a bit more strict. It’s like if a few people ignore the etiquette it’s bad etiquette but if a bunch do it, it’s okay. Which seems about right given when we went to our class orientation they told us that you’re not suppose to ride your bike on the other side of the going into traffic and you’re not suppose to ride a bike with an umbrella in your hand while it’s raining, BUT… surprise surprise, I’ve seen more Japanese breaking these rules then I see following them.

So why shouldn’t the trains be the same way, right? But besides breaking some etiquette rules, I saw something, sort of funny, but a bit of a pain for a lot of riders on the trains. I call it the “Ultimate Japanese Seat Block Maneuver”. It happens all throughout the train, day in and day out at all times of the day no 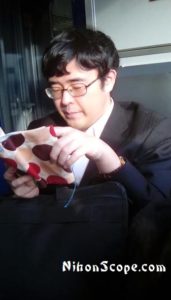 matter if the train car is packed! It’s a naturally understood phenomena that happens on the train where two Japanese will sit in a way where it discourages others that want to sit down because of having to be rude and asking them to move. Now I actually just think it’s mostly so that you’re not rubbing knees and pushing into the other persons bubble, but I think at times it’s an unconscious decision knowing full well if the train is not super full people will pass up those seats. >:)

Another thing that I noticed quite a bit is book covers, now I’ve heard of this before but I got my first picture of someone reading most likely some kind of interesting topic that he didn’t want anyone else to know about, I’m sure most of the women are reading their romance novels and they’d rather not show it off. Perhaps it’s good etiquette? Would I do it, probably not.

So there you have it a bit more interesting facts about train riding that you may or may not have known about.