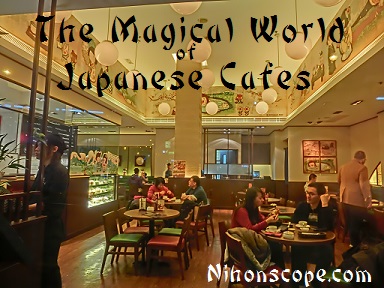 From Community Centers for the Elderly to Vampire Cafes in Tokyo. Japan Has Anything You Can Think Of… in Cafe Form!

Chances are even if you’ve never bothered to look into Japanese culture, you most likely have heard of Japanese cafes. From cat cafes, maid cafe even to vampires and beyond the Japanese cafe have truly evolved over the last 100 years from when they were first originated in the late 1800’s.

In 1877 soon after the Meiji period started for Japan (1868), Japan begun to import coffee, and soon after cafes started to appear.  At the peak of the cafe boom in Japan there was around 155,000 cafes across the nation, but during WWII supply of coffee stopped being important into Japan and it wasn’t until many years after the war that coffee begun to be imported back into Japan yet again. From that point about 88,000 cafes now exists in Japan.

From that point once coffee begun to be imported again the cafes across Japan started to evolve into something more then just a place to sit down and drink coffee. These cafes started to create places for people to watch TV, listen to the radio and to listen to record players of classical music. But from this point something happened, people got even more creative with how to setup their cafes. These business owners created sub-niches within the cafe scene.

But with all the weird and wacky cafes that are available to visit in Japan, there is one cafe that has started to appear more and more across Japan. The creation of community cafes have begun its rise in popularity, being that the Japanese in general have a long life span, there is now a large percentage of the population of Japan whom are elderly. These community centers are now appearing to give this older generation of Japan a place to go to talk with neighbors and to be of help to one another, in sense it’s like an extremely affordable elderly care program ran through cafes for as little as 300 yen a day per person. This trend will continue to climb, and being that Japan’s birth rate is declining, there will be more elderly in Japan by 2060 and because of this, there will not be enough young people in the work force to take care of the older generation, so the emergence of these community cafes are a basic social evolution at play which will hopefully take some burden off the social structure as time goes on.

But maintaining social connection and movement keep the elderly from becoming sick and then dependent on the system, so it’s a brilliant idea. But besides a very helpful movement within the Japanese cafes what kind of weird cafes are in Japan? I went out on a mission to find as many different cafes in Japan as I could, this is what I found:

So that’s it so far, this is the list I found that I feel comfortable sharing, there are even more specific niche cafes in Japan. But, that’s another story, for another time.